A rising number of consumers say that student loan debt is delaying their ability to buy a home, with women and millennials among the most affected, according to the sixth annual NeighborWorks America at Home report. 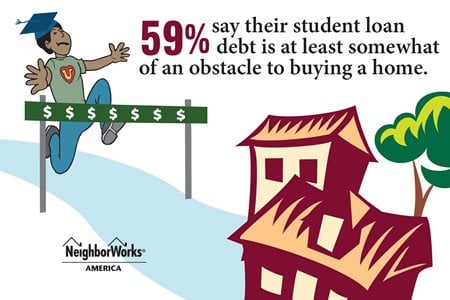 The survey, which quizzed around 1,000 U.S. adults, found that rising costs have pushed the overall student loan debt up by more than 130 percent since 2008. It now surpasses $1.5 trillion, accounting for 42 percent of all consumer debt. Of that, women are bearing the brunt, responsible for about two thirds of the total debt.

The survey found that 29 percent of women are “burdened” by student loan debts, compared to just 23 percent of men. It’s even worse for ethic minority women, who owe almost double the amount of white women. An additional 38 percent of women say they know someone who’s delayed buying a home due to student debts.

Millennials are also facing heavy debt from student loans. Fifty-seven percent of millennials surveyed say they are burdened by student debt, and 59 percent say either they or someone they know has delayed purchasing a home because of that debt.

“It’s important for people to have tools and resources they need to be informed consumers from the moment they consider owning a home,” says Karen Hoskins, acting vice president of homeownership programs and lending at NeighborWorks America. “A housing counselor can guide them through what often seems a daunting, confusing process.”

The report also recommends payment assistance programs for those struggling with student debt, who’d like to buy a home.

A separate 2017 study by the National Association of Realtors found that 83 percent of non-homeowners cited student loan debt as the chief factor delaying them from buying a home. That delay to buy was about seven years, the report found. Further, 22 percent of consumers surveyed say they were delayed by at least two years in moving out of a family member’s home after college because of their student loans.