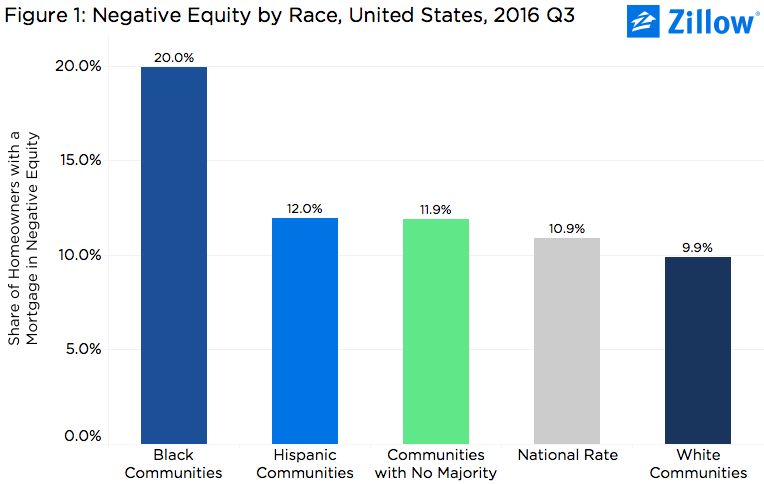 Negative equity is a persistent reminder of the housing crash. After the housing bubble burst in 2007, homes in predominantly black and Hispanic communities lost more value than those in Asian or white neighborhoods. While strong home value appreciation during the recovery has helped many homeowners resurface on their mortgage debt, black and Hispanic communities have not had as strong of a recovery.

Underwater homeowners are stuck in their homes, unable to sell except for in a short sale or by paying the remaining balance on their mortgage, and the paralysis has far-reaching effects. When a large share of homeowners can't sell their homes, it limits the inventory of homes for the entire market, leaving fewer options for potential homebuyers.

"Negative equity is not an equal opportunity offender, with certain markets still being more affected than others," said Zillow Chief Economist Dr. Svenja Gudell. "Our previous research has shown that negative equity is more concentrated among less expensive homes, and now we know that it is also more prevalent in minority neighborhoods than in white communities, which are also trailing in the overall housing recovery. These gaps can and will have long lasting implications for growth and equality."

Negative equity is not evenly distributed among homeowners – homeowners in black neighborhoods are more likely to be underwater than any other race in half of the largest U.S. metros.