Monthly rent is a bigger financial burden for people living in predominantly black or Hispanic neighborhoods than it is in white neighborhoods, according to a new Zillow analysis of race and housing affordability. 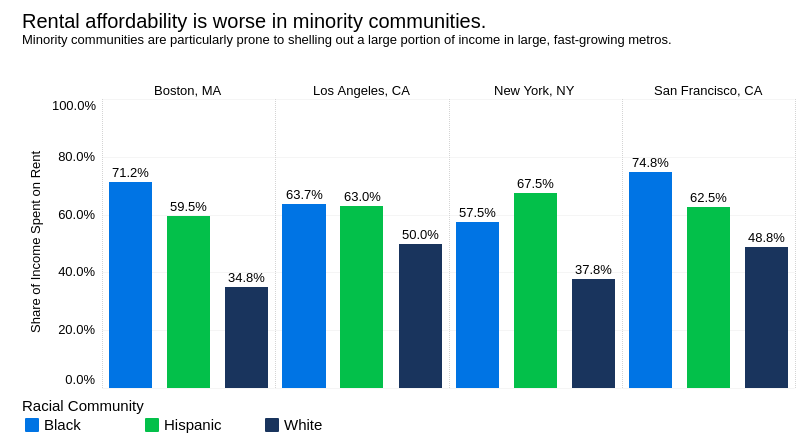 In markets that offer the best opportunities for social mobility, paying the rent in minority communities is an even bigger financial burden, mainly due to significantly lower incomes in these communities. In San Francisco, for example, rent in predominantly black neighborhoods requires nearly three-quarters of the median income there. In largely Hispanic neighborhoods, renters can expect to spend 62.5 percent of their income on monthly rent.

When housing costs consume such a significant share of income, renters often have to make financial sacrifices, like putting off saving for a down payment, medical care and planning for retirement. Homeownership can be an important path to building wealth, but making the transition from renter to homeowner is a bigger financial challenge for renters living in mainly black or Hispanic areas.

"This research sheds light on another example of inequality in the housing market," said Zillow Chief Economist Dr. Svenja Gudell. "Renters in African-American or Hispanic neighborhoods find themselves in a catch-22 situation - while owning a home is a great way to build wealth, you need to save up some cash to be able to buy. If you're spending close to half of your income on rent, saving up that down payment is going to be incredibly difficult."