By Press Release | May 16, 2017
TwitterFacebookLinkedIn2Buffer2PinterestCopyReddit
4
SHARES

After much anticipation, Ampeer—a new brand of exclusive turnkey luxury residences—will open the doors to its flagship Dupont Circle property in July. The property, which is the result of a highly-detailed and meticulous renovation of the legendary Patterson Mansion, will offer a total of 92 uniquely-designed residential units, communal living spaces that encourage social interaction, dedicated food and drink service, events programming and even replete with linens and glassware hand selected by the design team. 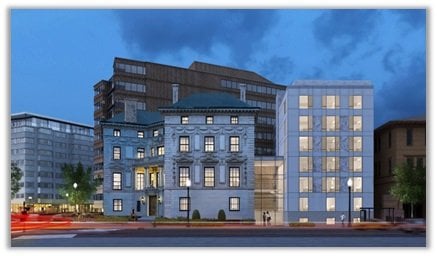 “We wanted to create a residential community that was about more than just a place to rest your head. Our vision for Ampeer was to provide residents with opportunities to connect – inside and outside of the building,” said Frank Saul, Founder and CEO of Saul Urban, co-developer of the project. “Through our inviting common spaces, morning breakfast and evening drinks and hors d’oeuvres, residents are able to connect with their peers, while our dedicated team of lifestyle associates and diverse line-up of programming provide them access and connection to the city.” Rooney Properties, a major real estate developer in the DC Metro area, is the other co-developer of the property.

The concept, which is being pioneered in DC, will be the first of its kind to provide a social current in tandem with a lease, a welcome amenity to the highly-transient professionals Ampeer targets. Following its launch, the model is expected to be replicated in other major international cities.  Ampeer’s prime Dupont Circle location is in walking distance to dozens of restaurants and cultural institutions. 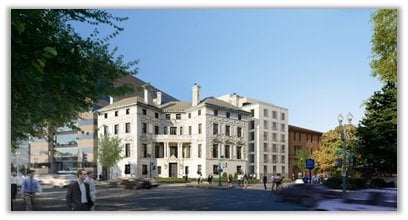 Ampeer has been several years in the making with every aspect carefully curated and thought out. From the hiring of acclaimed residential DC-area designer Darryl Carter, whose work has been featured and recognized in dozens of publications including Architectural Digest, Elle Décor and Metropolitan Home, to oversee the mansion’s makeover to a well-seasoned team of accomplished builders led by Saul, whose heritage in the real estate industry goes back several decades, nothing is left unturned.

“Frank’s vision was to maintain the building’s elegance, while merging it with modern flare,” said Carter. “What we have created in Ampeer has gone beyond anything we could have ever imagined. Its historic roots proved to be a spectacular canvas to reimagine what an elite living space could be. Simply put – walking through those doors, you enter a whole new world.”

Designed to provide residents with an environment where they can recharge, relax and socialize, Ampeer’s public spaces focus on offering residents the best of all worlds. Whether they are sipping drinks in the ballroom with complimentary evening hors d’oeuvres and on-site mixologist, savoring complimentary breakfast in the dining room or studying in the library, Ampeer has everything they need to live the life they want.

A SENSE OF BELONGING

Ampeer caters to the lifestyles of the highly-transient, high-income individuals who find themselves in DC for an extended period of time. Rather than staying in a hotel or corporate housing, Ampeer offers an opportunity to connect. Through on-site social programming and community events, as well as exquisitely-appointed communal spaces, the exclusive residence invites friends and peers to gather and engage.

Whether it’s the ideally-appointed address on Dupont Circle, the convenience of turn-key living, 24-hour concierge service, state-of-the-art fitness center, complimentary breakfast or the included bike and car share memberships, Ampeer equips residents with every necessity, want and resource to make their time in DC as hospitable as possible.

Throughout the mansion’s history, it has served as a social heart of Washington, where coveted invitations brought together prominent statesmen, aristocrats, journalists, industrialists – and even presidents. In fact, President Calvin Coolidge and First Lady Grace Coolidge resided there while the White House was under renovation. It was also at the mansion that they welcomed Charles Lindbergh following his celebrated solo transatlantic flight. While the interiors may have been transformed, the legacy of power, prestige and sophistication live on in Ampeer.

“We couldn’t be more excited to open our doors—for those who want to enjoy the luxury of their private space as well as all those who are looking to avail themselves of all the cultural amenities of DC,” added Saul. “Our vision for an extraordinary full-service living experience has finally been realized, offering those coming to DC new opportunities to immerse themselves in one of the greatest cities in the world.”

Ampeer has already begun pre-leasing, with move-in dates beginning early July. Pre-leasing for the units, which are targeted at diplomats, politicos, executives, consultants, lawyers and the like, has been very strong, with many units expected to be leased by the time of Ampeer’s opening.  Tenants can take leases for as little as three months and up to one year. For more information, visit ampeerresidences.com.

About Saul Urban
Saul Urban is a private real estate development company based in Bethesda, Maryland.  In response to the growing demographic trend of people migrating back to the city, Saul Urban’s new brand of luxury residential buildings cater to single-person households living in walkable locations in city centers. Offering an array of services and amenities, these fully-furnished apartment properties create vibrant urban lifestyles and are a getaway to the city. Other projects under development include The Blagden, another turn-key, social living experience, which when completed will boast 123 units in the Shaw neighborhood of DC.