Backyards Become the Life of the Party Following Landscaping Projects

It’s time to take the party outside, according to the Houzz Landscaping Survey,* which found that over half of homeowners spend more time entertaining outside following landscaping projects (51%). More than a quarter of homeowners also report that their usable outdoor area is significantly larger than their home (27%). So, transforming the yard into more living space makes it a prime destination for the next garden party or backyard barbecue.

The study found that homeowners invest in a variety of elements during landscaping projects that make their outdoor areas more livable, including ample seating for family and guests with lounge furniture (43%), dining furniture (34%) and benches (27%). The addition of fire pits (38%), ceiling fans (15%) and patio heaters (14%), allow festivities to continue despite natural temperature shifts, and new string lights (35%) and rugs (14%) suggest a focus on exterior ambiance. A full-service landscaping company  can assist you with all of these projects.

Technology also plays a role in making the yard entertainment-ready. Of the nearly one in five homeowners who added or upgraded entertainment systems during their landscaping projects (18%), three in five opted for a new television (59%), followed by wired and solar speakers (48% and 42%, respectively). One in 10 homeowners also added wired and solar charging stations (14% and 11%, respectively). 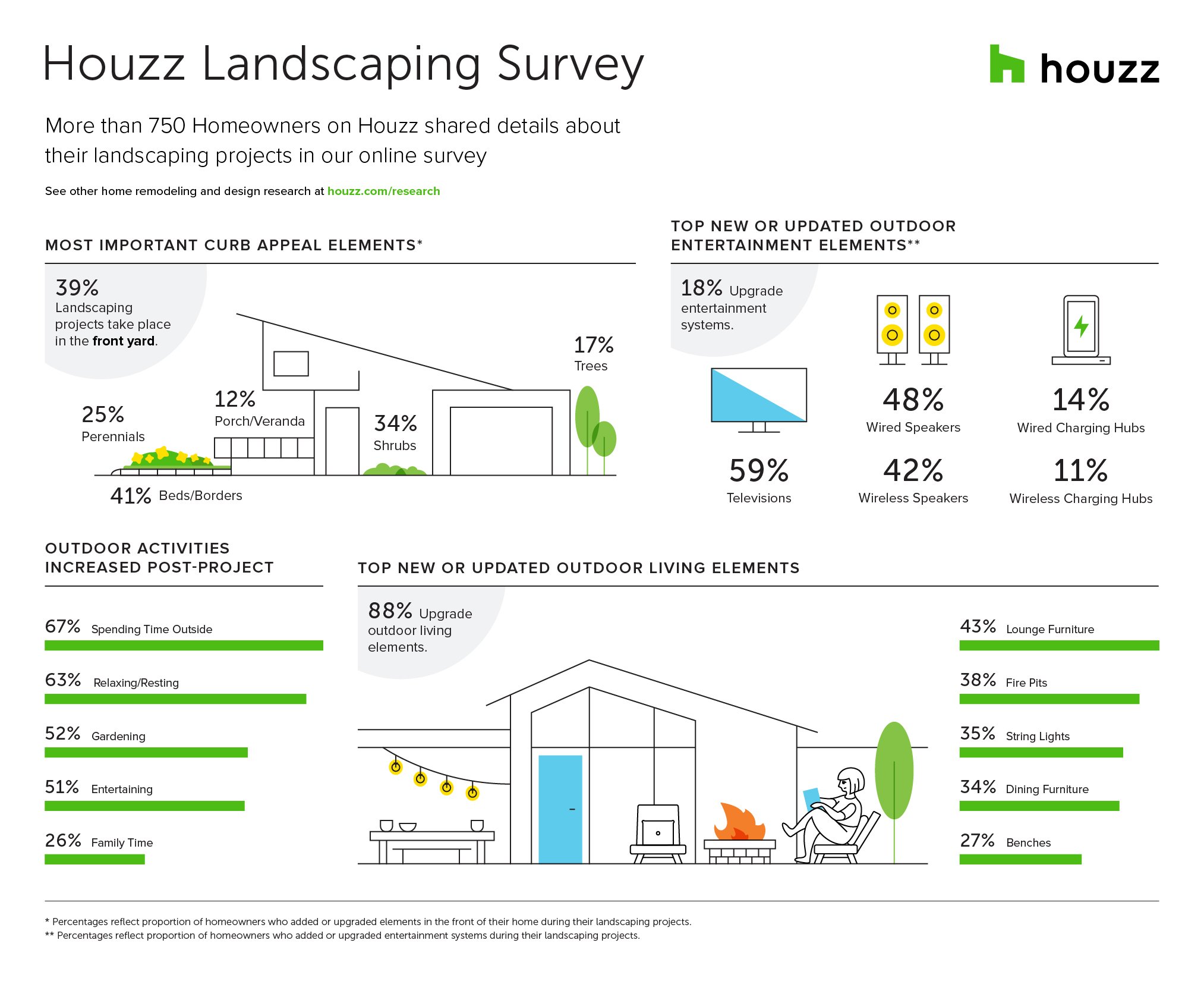 While the majority of outdoor projects take place in the backyard (70%), nearly two in five landscaping homeowners update their front yard (39%) and more than a quarter work on side yards (30%). Homeowners adding or updating elements in the front of their home report that the most important features contributing to curb appeal are beds and borders (41%), shrubs (34%) and perennials (25%). Considering these priorities, it’s no surprise that they are also the most popular features being installed in front of homes (60%, 54% and 56%, respectively).

The leading reason for homeowners to begin a landscaping project is to improve elements of the outdoor space that have deteriorated or broken down (29%). Following a year of unexpected weather patterns, one in ten homeowners report that their outdoor projects address damage from harsh weather or natural disasters (9%), including hurricanes (35%), rainstorms (26%) and drought (24%). Costs for landscaping projects vary widely, with more than half of homeowners who completed their outdoor renovation spending more than $10,000 (56%) and nearly one-third of homeowners spending less than $5,000 (32%).

Regardless of the motivation or budget, the majority of homeowners who completed a landscaping project report that they spend more time outside (67%). Some of the ways that homeowners enjoy their newly upgraded outdoor space include relaxing (62%) and gardening (44%).

You can browse a collection of outdoor essentials from the Houzz Shop here.

*Houzz survey of more than 750 U.S. homeowners using Houzz who are in the midst of, are planning or recently completed a landscaping project, was fielded between February and March 2018