Existing home sales hit highest levels in a decade in 2016

The number of existing-home sales in 2016 ended at the highest level since the housing boom days, according to fresh data from the National Association of Realtors. 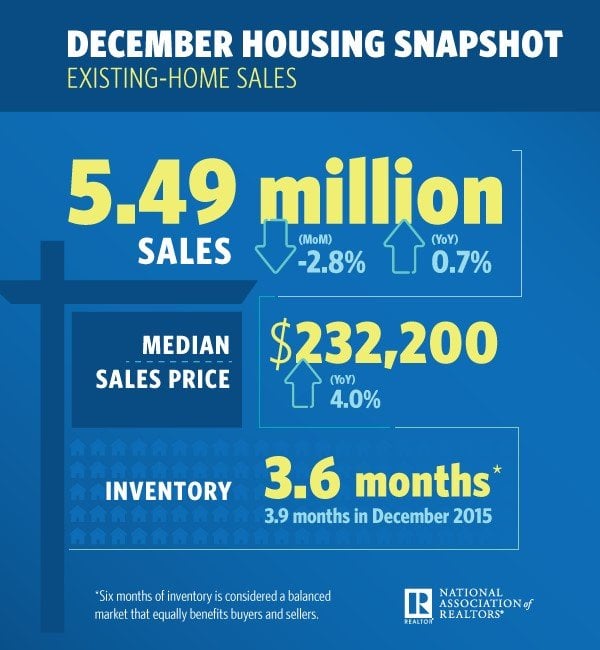 Interestingly, December wasn’t such a great month for sales, which decreased by 2.8 percent to a seasonally adjusted rate of 5.49 million, from an upwardly revised 5.65 million the month before. Thanks to last month’s slide, sales are up just 0.7 percent compared to one year ago.

“Solid job creation throughout 2016 and exceptionally low mortgage rates translated into a good year for the housing market,” said Lawrence Yun, NAR’s chief economist. “However, higher mortgage rates and home prices combined with record low inventory levels stunted sales in much of the country in December. Low housing supplies continue to press on the market.

“While a lack of listings and fast rising home prices was a headwind all year, the surge in rates since early November ultimately caught some prospective buyers off guard and dimmed their appetite or ability to buy a home as 2016 came to an end,” Yun added.

Digging into the data a bit deeper, we can see that the median existing home price for all types of home was $232,200 in December, up from $223,200 one year ago. That increase represents the 58th consecutive month in which home prices have risen.

The NAR also highlighted the shortfall in housing inventory, which dropped by 10.8 percent to just 1.65 million homes currently available for sale. That’s the lowest figure since the NAR first started tracking inventory levels in 1999, and is 6.3 percent lower than the 1.76 million homes available for sale in Dec. 2015. Indeed, inventory levels have slipped for 19 straight months now, to a supply of just 3.6 months.

"Housing affordability for both buying and renting remains a pressing concern because of another year of insufficient home construction," Yun said. "Given current population and economic growth trends, housing starts should be in the range of 1.5 million to 1.6 million completions and not stuck at recessionary levels. More needs to be done to address the regulatory and cost burdens preventing builders from ramping up production."