Another #Follow Friday on Twitter leads me back to searching the web for the best and worst of digital realty. And once again, we have run into a familiar snag, the almost total disregard for the web as a real estate communications conduit. Even for agency customers. This week, Grand Rapids, Michigan is the target market. As you will see in the review below, we had to go pretty far afield to find good work being done on the web.

When the going gets tough, property professionals need to get tougher, engage more. So far, Grand Rapids' online engagement sucks, look why.

In order of appearance in the Google SERPs (Search Engine Results Pages), Grand Rapids searches for "Grand Rapids homes" ends in a dismal listing of cookie cutter national sites, and a sparse few local agent ones. Grand Rapids Association of REALTORS ®, Trulia, Yahoo Real Estate, Zillow, Homes.com, Grand Rapids Craigslist listing, and Grandrapidshomefinder.com will be left out of this review, for obvious reasons. What remains is, well, you'll see.

Marc Brace put himself up a website, at some point. The Prudential Preferred Realtor, to be honest, has so little to compete with in Michigan, his smiling face and personal details appear quite refreshing when compared to competitors. He did not have to go far to beat out other Grand Rapids agents though. That being said, it's safe to say we have a new champion city for the title of "WORST ONLINE REALTY REPRESENTATION" - Grand Rapids does not even exist folks.

To give the reader some idea how disappointing Grand Rapids is where online buying and selling of homes goes, let's rate Marc's smiling face, in all honesty. He gets a 1 of 10 for being in the SERPs at all. No Facebook to see, or Twitter, blog, limited info, mediocre pictures, any user stopping at Marc's site is apt to pass on by. That is unless they need to move to GR FAST! Here is his website.

That was the top position for independent agents folks. At least where searching Google for a house in Grand Rapids goes. Next you would find a fellow named Robert Young via a site domain, http://www.grhomebroker.com/. Not exactly keyword optimized, this site is in the top 10 SERPs too! Here, the enthusiastic home buyer can:

Robert, I have never given one of these before, but due buyers should pray I decide to position something above you to knock you and that other fellow out. At Page Rank 1, and Alexa 15 million, I should be able to do that with this post. Grand Rapids Real Estate rates 0 our of 10. If you have to ask why, don't comment for your own good. No image needed. Let's move on.

Grand Rapids Homes Live afforded me some hope, and a bit of wonderment too. Situated just beneath Robert Young's site, Joe Jovanovic of Keller Williams Grand Rapids at least offered a nice image of a fireplace, and even his LinkeIn link to help buyers out. Let's make this painless, for Joe and the reader. Scrolling down like a Wikipedia page to find a sparse LI profile, this does not equal digital savvy, cutting edge house marketing, etc. Joe gets a 1 of 10. Add the Twitter or FB Joe, and get one or two more. Join the real conversation, and we'll offer help for free maybe. Sheesh. Grand Rapids Live, is dead. 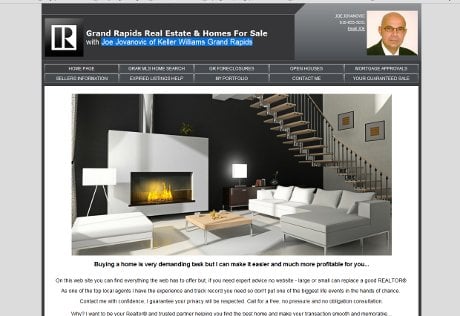 Next up? Grand Rapids Real Estate Info. Andrew Ingram, who you can find "listed" atop the web 1.0 website, evidently heads up something called Realty Executives Platinum Group? Don't click on the mail link in Google Chrome tho, it won't work in the new browsers. I fact, hardly any of the links will work from the old site. About the best I can offer Andrew here, by way of bones, is: There was a lot of data added over the lifespan of this site. Once upon a time, home sellers and buyers might have found a cottage or two here. Sadly, at Alexa 8 plus million, no one really sees this site anymore. Rating: 0 of 10 (that's two zeros in one review)

Wow. Last in the search results, Mr. Brown Sells Grand Rapids (Bellabay Realty) - Robert Laurence Brown has a BA in Political Science from Aquinas College. He also looks like a very nice man. His digital know how and engagement online for Grand Rapids is - 0 of 10.

BUT WAIT! A tweet led me to investigate a possibility for Michigan. On a hunch I followed the link found via the feed of Huber Property Group, landed on their Facebook aspect, then searched their company name. The company having just joined Facebook apparently, has a decent website standing up, SM buttons in place here. So it appears, Owner Clay Huber, and his team, may just pull Grand Rapids out of the dungeon of homes sellers worldwide soon. Maybe.

I won't go into analysis of Huber's SM presence, suffice it to say he has beaten all the others by light years even out of the gate. Form fills, mediocre images, and limited media (stock images etc.) put his online branding somewhere in the middle, nationwide. We have now analyzed a few hundred key markets, for the reason being - the industry needs more excellent players. Unfortunately, so few are willing to make even small sacrifices. Huber at least, is venturing to help broadcast client values to the web. Looking at his SM effort, tied to the site, the rating should be 6 of 10 for now. For Grand Rapids, just in my view, this is tantamount to Huber being King Leonidas in 300. Let's hope he can hold of the Persians around him.

This one is not so difficult to break down for you. In fact, I am almost insulting the reader by summarizing here. If Grand Rapids Realtors had any conception of how they might be perceived, their brands harmed, all would make some minimum of improvement. Just linking their Twitter to their sites, if nothing else, would be superior to apathy. So far as I could find easily (and this is one of the keys) only Clay Huber even has a clue. That said, no one should have to hunt for a professional's own website. Grand Rapids sucks where finding a face to trust in real estate goes. This is my view.

13 comments on “When the Market Blows: Grand Rapids Pros Suck”