Completed foreclosure represents the total number of homes lost to foreclosure. Prior to the 2008 financial crisis, the home ownership rates peaked in 2004. The fallout of 2008 witnessed massive fallouts in the real estate business and employments, which resulted in massive foreclosures across the country. To date, over 7.8 million homes in the U.S. have been lost to foreclosures.

The report also points out a number of mortgages facing serious delinquencies. Such delinquencies dropped by 23.3% from June 2014 to June 2015. Over 1.3 million mortgages (or 3.5% of all mortgages) fall within this category. This has been the lowest delinquency rate since January 2008. On a monthly basis, the number of seriously delinquent mortgages reduced by 3.4%. 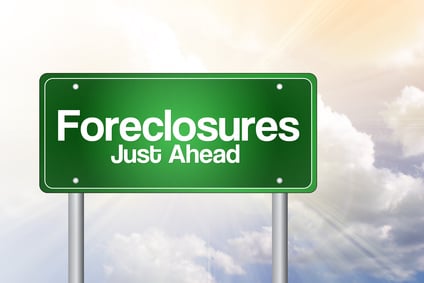 The drop in foreclosure rates is accompanied by a continual decline in loans disbursed before 2009, along with major gains in employment and a steep rise in the housing prices. However, the decline has not been uniform on a geographical basis. This is because the foreclosure rate varies with the locality and the metropolitan area involved.

For the second quarter, Denver and San Francisco reported the lowest drop in foreclosure rate (approximately 0.3% for each). The figure was significantly higher, at 3.5%, in the Tampa metropolitan area. Nassau and Suffolk Counties reported the highest foreclosure rates of 4.8% combined.

Serious delinquencies, on the other hand, are at their lowest level since the past eight years. This reflects the slow and steady improvements taking place in the U.S. economy and the real estate business since the economic meltdown. The results also stem from a positive impact of the stringent criteria imposed upon loan applications. With such reforms, not everyone can apply for a loan. This will prevent the delinquency rate from rising.

For homeowners, falling delinquency rates is a good sign. By improving their credit score, they can easily apply for a fixed or adjustable loan, without the risk of default on any payment. For the second quarter, Florida, Texas, Michigan, Ohio and California reported the highest number of completed foreclosures.

District Columbia also reported the highest foreclosure inventory as a percentage of all the mortgaged homes, with New Jersey, New York and Hawaii reporting figures of 4.7%, 3.7% and 2.5% respectively.