The sale set a Vail and Eagle-county wide record sum for a single-family dwelling. The home, designed by local architect Kyle Webb and built by local George Shaeffer Construction was the recipient of Colorado Homes & Lifestyles’ Home of the Year in 2010. The buyer was not disclosed. 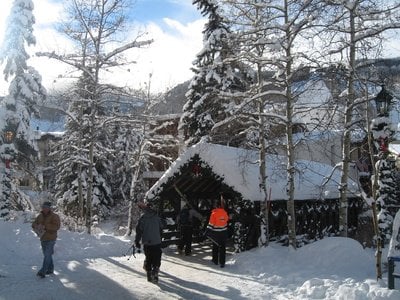 “This was truly a historical sale in a particularly extraordinary location,” said Slifer Smith & Frampton Real Estate (SSF) listing broker Donna Caynoski. “Given the many custom homes being built in the neighborhood, the value of 107 Rockledge was strongly supported.”

The original home was built and owned by Vail’s first socialites, Vernon “Moose” and Ann Taylor, who put Vail on the map in the early days by hosting elaborate parties and living a glamorous lifestyle in the 1960s. “The home was completely rebuilt in 2007 and the property has changed ownership only twice in over 50 years and likely won’t be available again for generations. It’s that valuable,” said Caynoski.

“There is no question that the appetite for special, high-end properties has increased of late,” said Jim Flaum, managing broker for Slifer Smith & Frampton Real Estate. “I think a lot of luxury buyers have been on the sidelines for a variety of reasons and frankly, they’re ready to leave the sideline as they discover properties that they want and that are special to them and their families. Colorado is a spectacular place and Vail is iconic within Colorado.”

The other significant home sales and under contract in Vail in the last quarter of 2016 include a $17.5M single-family home on West Forest Road and a single-Family home in Vail's Golf Course neighborhood which sold in September for $14,692,500.  Three duplex homes on Gore Creek in Vail Village have sold or gone under contract between $13.35M and $15.5M. Slifer Smith & Frampton also has listed and brought a buyer for an under contract penthouse in Golden Peak listed at $9 million. Slifer Smith & Frampton has played an integral role in four of the six sales/under contracts in the Town of Vail and five of the seven sales in Eagle County.

In addition to the exciting new surge of high-end luxury home sales in Vail proper, there is renewed interest in luxury homes down valley as well.  In the past month, there have been two high-end ski-in/ski-out properties go under contract in Bachelor Gulch Village, on Beaver Creek Mountain.  “We are thrilled to see this resurgence of interest as buyers are appreciating what on-mountain living is all about,” said Catherine Jones Coburn, the Branch Broker for the SSF Bachelor Gulch office, whose listings are now under contract and listed at $13.4mm and $9,695,000.

“We haven’t seen homes sell at this point for almost two years. Discerning buyers are seeking-out exclusive neighborhoods in the valley.”