Idinaidi Gets Funding Round for Russia Real Estate Moves Online

In tech news from Russia, the Federation's fastest growing real estate portal, Idinaidi.ru, has just announced having received venture funding. The Sorren Media, along with Camco Private Equity Group, were named in the startup's release. For an early stage startup, there's a lot to be said for this one's chances.

In public beta testing since mid-December, Idinaidi is squarely aimed at Russia's vast housing market and the rapid adaptation of digital there too. For those unaware, Russia passed Germany as the most "wired" country in Europe. Experts project that the Russian Federation will have 100 million users by 2015. Stephen Inscoe, Founder and CEO of Idinaidi.ru, offered this comment via the company's press:

"Idinaidi is the product of 2 years research and development involving over 900 people in 38 cities throughout Russia, and is the first site designed from the start as a national mass-market site."

From a practical standpoint, and looking at the startup's website metrics, it seems highly unlikely more than a handful of users are engaged on the homepage of this site. Alexa rates the young site a PR2 at 2,259,902. No significant SEO seems to have been done, Alexa again shows only 2 sites linking in. The company has created a Twitter profile, but as yet there is little or no engagement. The same situation holds true for Facebook, no real endeavor to either brand or push social media. Even on VK, engagement is at a minimum. 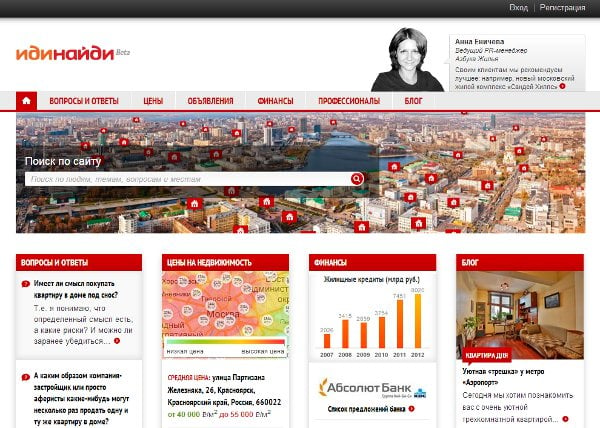 There's no doubt the online real estate space for the Russian Federation and other Eastern European nations will expand rapidly in the months and years to come. Startups like Idinaidi can and will assist investors, agents, and all concerned by providing ease of access and good tools too. For very early stage startups, it should also be noted that having several pieces of the development puzzle lagging behind is normal too. Still, ramping up social media and marketing, along with core constituencies, is vital for what one could call any "killer" startup.

I will say this for Idinaidi, among the hundreds of Russian startups I have scrutinized these last 10 years, their's is among the top 10 percent for understanding "at least" that there are many channels needed to drive business. Looking at how they have already embraced tablets... We'll follow this one closely.