Knight Frank has just released its new Wealth Report, listing the top twenty most expensive luxury real estate markets in the world, and it once again shines the spotlight on how far property prices have fallen in the US.

With just one city making the top ten, it's clear enough that the prestige of luxury homes in the US just isn't what it used to be as the world's elite focuses on other, more alluring destinations around the world. New York is the lone US city to land up in the top ten most expensive real estate markets in the world, but with luxury homes averaging between just $2,030 and $2,240 a square foot, it still falls some way short of the millionaires row that is Monaco - where luxury homes will set you back anything from $5,350 to $5,920 a square foot.

Monaco has always had consistently high real estate prices, but the tiny nation saw a considerable jump over the last year due to moves by French President Hollande to introduce a new "wealth tax" in that country. According to Knight Frank, this caused many buyers to shy away from purchasing French properties, shifting their attention to Monaco instead, where there is no personal income tax.

Second on the list was Hong Kong, with luxury home prices ranging from $4,570 to $5,050 per square foot, followed by London in third place, then Geneva and Paris. New York ranked 8th overall, while Miami and Los Angeles were the other US cities in the top twenty, ranking in 13th and 15th place respectively.

Not on the list, but meriting a special mention is the luxury market in Indonesia, where luxury home prices rose faster than any other nation - by more than 38% in the capital Jakarta, and 20% in the island paradise that is Bali.

Elsewhere, Knight Frank also reports that the number of 'wealthy' people in the world is growing. Individuals with a personal fortune of $30 million or more rose by 5%, or 8,700 people, from this time last year. What's more, this figure is expected to double within the next ten years.

Here's the full list of the top twenty most expensive real estate markets in the world, according to Knight Frank. Click here to download a full copy of the report. 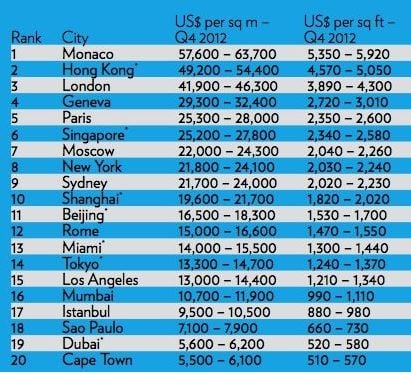