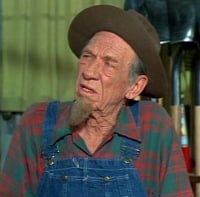 It's Saturday morning. I woke up thinking about a great town I lived in once. Then I wondered if Orlando, Florida, heart of the sunshine state, has caught up with the digital revolution. Surely Walt Disney's crowning achievement, buying up a patch of central Florida, has to have led to a sort of East Coast Silicon Valley effect! The resultant online effort more resembles fabled Hooterville.

Searching Google again, for clues to real estate companies and their efforts to sell YOUR home, sadly, it appears not. I guess Florida agents are relying on the old standby - waiting for the family to drive by in the station wagon - and call the number on the sign. You see, proactive is not in the language of real estate dogma. Apparently, most agents are so rich and lazy - or either cheap and hard headed - showing your house to 2 billion Internet users is a secondary sales gimmick.

This list won't take long, Orlando is that jacked up.

Orlando Realty Experts - This site is a straight relic of Web 1.0 and the Dot Com Era. Pop Ups Included. Interestingly, this site has a blog. Unfortunately, it is made up of duplicate content that appears to have been scraped from the Sarasota Herald Tribune. At Alexa Rank almost 2 million though, luckily, only about 3 people a month have to put up with these experts. What a waste of digital space. The owners of the site are apparently Orlando Real Estate Associates - good luck finding out who they are. 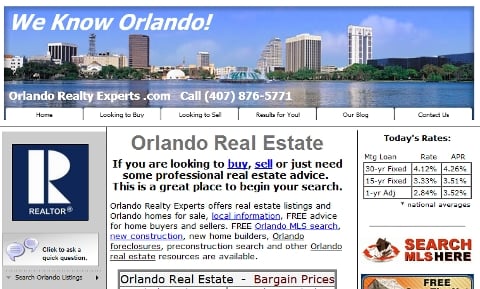 Search Homes Orlando is, at least, prettier than the "expert" site above. Hell, they even have a Google + button. With 180 plusses! Wow, these guys may actually see my condemnation of their digital effort here? But wait a minute. These guys have some of the very elements I have been bashing America's agencies for for months!

Okay, we may have found a Florida real estate company that knows something a million do not. Easy to navigate site? Check. Big pictures and a nice listing index? Check. Blog content - updated and original? Check. Facebook? Twitter? Well, maybe these guys are so far ahead they're waiting for Google Real Estate. You can't have everything, but Robert Sabrkhani's and Marion Krick's faces and profiles are up there. At least they are not ashamed to show their faces. At Alexa 440 something thousand, Search Orlando is not doing too bad. As for my old neighborhood in Maitland? The housese there go for a million! What?

Greater Orlando Homes - Again, Web 1.0 and yet another any business should be ashamed exists for their online brand. I am taking off the gloves on these real estate entities I have decided. Anything worth doing is worth at least trying to do right. The only exciting or edgy thing about is Gitta Urbainczyk's efforts on YouTube and her blog - both of which are less than really inspiring. Let's just move on and be merciful here.

Get Orlando Real Estate- Let me run through this. Remax, okay. Karen Arbutine, she's cute. Are they selling online? Nah! Next.

Eola Park Realty - Jason B. Vandam, he's cool in a sort of CSI Miami way. The site is awful. The last blog post was in 2010 - did the lights go out at Get Orlando and no one told Google? Let's move on.

Orlando Real Estate dot com- They had the domain, as for why they are situated last on Google's front page? People don't visit deplorable websites much? Jerry Stoffer and his Wife Irene Stoffer, they look like really nice people. I bet they are super real estate peeps too. If I were ready to retire (which I sorta am) I would trust them to show me Central Florida property. But, not if I ventured to their website. Next.

Lee Cameron Realtor - Let's run through the checklist. Picture of Lee? Check. Blog? Check. Facebook replete with 29 pals? Check. Super cool Twitteraspect? Check. AND! Of all the Orlando real estate agents so far, Lee offers up the most credible evidence he has a clue - his tours of the area via YouTube. Lee's channel is actually very nice, despite the fact Lee himself comes off like Mr. Fred Ziffel from Green Acres.

We leave off with a sort of "best for last" of Orlando, Florida digital engagement, Lee Cameron in my old stomping grounds at Winter Park.