November saw a slight uptick in pending home sales on both a monthly and an annualized basis. The National Association of Realtors said the increase was the largest gain in contract signings since June, boding well for the market overall. 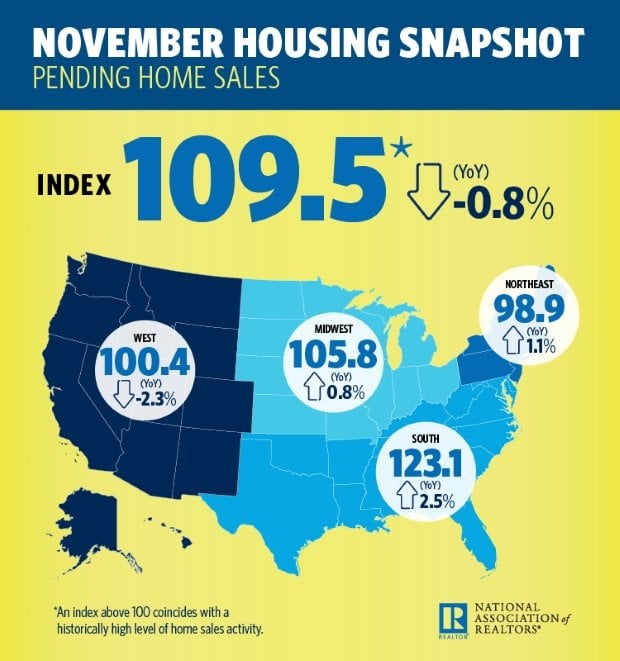 The NAR’s Pending Home Sales Index, which is a forward-looking indicator that’s based on contract signings, rose by 0.2 percent in the last month, hitting 109.5, its highest level since June when it hit 110. The index is also up 0.8 percent compared to one year before.

However, experts warn that both existing-home sales and price growth could slow down in 2018, thanks to the impact of altered tax benefits of homeownership affecting some higher cost areas.

“The housing market is closing the year on a stronger note than earlier this summer, backed by solid job creation and an economy that has kicked into a higher gear,” said Lawrence Yun, the NAR’s chief economist. “However, new buyers coming into the market are finding out quickly that their options are limited and competition is robust. Realtors say many would-be buyers from earlier this year, stifled by tight supply and higher prices, are still trying to buy a home.”

Existing-home sales are up 5.8 percent—more than double wage growth. Inventories remain tight at a 3.4-month supply of homes on the market, which is the lowest since NAR began tracking in 1999.

“The strengthening economy, and expectation that more millennials will want to buy, serve as promising signs for solid homebuying demand next year, while also putting additional pressure on inventory levels and affordability,” Yun continued. “Sales do have room for growth in most areas, but nationally, overall activity could be slightly negative. Markets with high home prices and property taxes will likely feel some impact from the reduced tax benefits of owning a home.”

Yun says that existing-home sales will finish 2017 at around 5.54 million, which is an increase of 1.7 percent from 2016 (5.45 million). The national median existing-home price for 2017 is expected to increase to around 6 percent.

Yun projects that in 2018, existing-home sales will see little change, declining just 0.4 percent to 5.52 million. He also forecasts that price growth will moderate to around 2 percent.