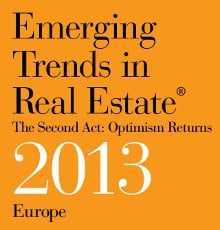 As we reported the other day, the European investment market is  now headed into a period of very conservative moves. With German cities now dominating investment, especially in commercial, certainly some funds seem likely to dry up for the rest of Europe.

A recent PricewaterhouseCoopers (PwC) report (PDF) actually ranks 27 cities across Europe based on 2013 expected investment performance. If the numbers of the report hold true, the aforementioned cities will get a booster shot for value, while markets such as Athens, Barcelona, Dublin and Madrid will may find slim pickings profit wise.

The report, done in conjunction with the Urban Land Institute, goes on to discuss factors involved in trending the industry toward the aforesaid ultra conservationism such as; the influence of sustainability, the availability of equity for finance, regulation across the various countries, and other key factors. However, when all is said and done a constricting of investment outside North Central Europe does nothing to solve the current situation in the EU.

The map below shows the PwC predictions for specific cities around Europe.

For investors looking for the "sure thing" in Europe, really only Munich shows the characteristics PwC or anyone might rate a top investment potential by. One interesting city, Istanbul, also shows signs of moving up among European capitals where growth is concerned. The Turkish city actually ranked number on in the two previous reports. It seems certain unrest in the Middle East may have slightly overshadowed the positivism shown toward this market. The good news for potential investors is, many restrictions to foreign ownership have been lifted there.

Finally, while Poland has not made the news for its great potential for growth, no other country in the EU actually more activity. With financing readily available compared to most, Warsaw and other Poland cities may be the "dark horses" of any race to profitability this year. While optimism is a keyword for PricewaterhouseCoopers and all expert organizations focused on Europe, it seems clear that pulling back resources in a circle the wagons fashion, is not the way for Europe to emerge from the current crisis.

It's more than a little interesting, and ironic, that taking risks is a necessity for any sort of gain - and that investors are so scared to death of taking any.