By Press Release | May 20, 2017
TwitterFacebookLinkedInBuffer3PinterestCopyReddit
3
SHARES

Rachio, maker of the highest-rated smart sprinkler controller across major retailers and tech review sites, today announced the findings of their “State of the Yard” study of American homeowners. The results highlighted conflicting attitudes regarding watering etiquette, confusion about how much to water, and lack of awareness that smart home benefits are expanding beyond the home and into the yard.

The American Society of Landscape Architects estimates homeowners spend an average of 10 percent of their home’s value on landscaping, so it’s no surprise most homeowners see the yard as a reflection of themselves, and judge neighbors similarly. In fact, 87 percent of people believe maintaining a beautiful yard is as important as keeping their house looking good. 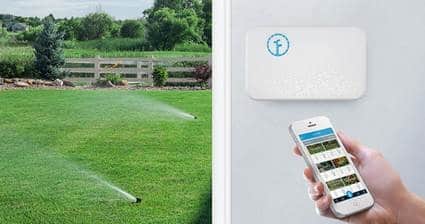 To this end, the study found homeowners have much to learn about how smart home devices can help in their yards, and they are eager to delegate outdoor duties.

Smart home smarts: 50 percent of homeowners didn’t know the benefits of smart home devices - such as saving time, money and resources - could extend to their yard.
When ranking smart home gadgets - including lighting, doorbells, appliances and thermostats - as “cutting edge and innovative,” 61 percent of respondents selected smart sprinkler controllers as a top choice. Smart thermostats and smart washer/dryers, the next most frequent choices, trailed behind with 44 and 26 percent respectively.
70 percent believed smart sprinkler controllers could save the most resources, besting both thermostats and lighting (46 and 27 percent respectively).

Backyard bravado: While most homeowners (69 percent) say they are confident their lawns are getting the correct amount of water, 81 percent “would love” to know if their yard was watered accurately.
Male “sprinkler swagger” is significantly stronger than their female counterparts, as men are more likely (80 versus 64 percent) to say they know how to operate irrigation systems with confidence, and how to water the right amount (74 versus 65 percent).
More people think it is harder to understand the requirements of their lawn than the needs of their spouse or friends (22 versus 18 percent).

Garden gaffs and guilty conscience : 70 percent of people are bothered when they see neighbors watering their yards before, during or after it rained; however, even more (76 percent) admit to “inappropriately sprinkling” themselves.
Only one in four homeowners knows that running sprinklers for 20 minutes uses more water than taking a 2 ½ hour shower, 85 toilet flushes, or a month’s worth of dishwasher runs.
Respondents from the Western region of the U.S. were more likely to know this (32 percent) compared to other regions (22 percent New England/East, 24 percent Midwest, 26 percent South); which is evidence that regional drought-inspired water education has worked.

"Homeowners invest a significant amount of time and money in their landscaping, and smart watering is the easiest way to protect that investment and ensure a healthier, heartier yard,” said Franz Gasometer, CTO of Rachio. “There’s tremendous opportunity for homeowners to avoid wasting water in their yards, no matter how exceptional their gardening skills are.”

To celebrate Memorial Day, from May 19 - 29 Rachio is offering a $50 gift card when you purchase a Rachio Smart Sprinkler Controller from Amazon, Best Buy, HomeDepot.com, Lowes.com, or Nebraska Furniture Mart, in addition to the significant EPA WaterSense rebates available nationwide. To learn more or to purchase, visit Rachio.com, Amazon, Best Buy, Home Depot, or Lowes. You can also download the free Rachio app on iTunes and Google Play.

Methodology for “State of the Yard” study:

Rachio commissioned independent data collection firm SSI (Survey Sampling Incorporated) to conduct a national study among U.S. homeowners with sprinkler systems. The survey was conducted from March 28 - April 2, 2017, and a total of 1,000 homeowners completed the online interviews. The data is weighted slightly to be representative of the U.S. population.

Rachio, the maker of the leading smart sprinkler controller, is changing the way people think about water. The Wi-Fi enabled controller and mobile app make using at-home sprinklers easy and convenient while saving users water and money. With Rachio technology, the term ‘smart home’ expands beyond the house and into the yard, allowing users to “set it and forget it” while helping conserve one of the planet’s greatest resources. To date, Rachio has helped users save more than three billion gallons of water. For more information, visit www.rachio.com.