Few would deny that when it comes to advertising, sex sells. But while suggestive ads are an effective means of reaching out to buyers, that doesn't mean they are always appropriate.

Pushing the boundaries recently was real estate agent Diana Arvatescu, based in Calgary, Canad. She's caused a bit of a stir this week with the launch of a controversial new billboard ad that features herself striking a seductive looking pose, with the tantalizing promise of: "Let me take you home. It's gorgeous inside." 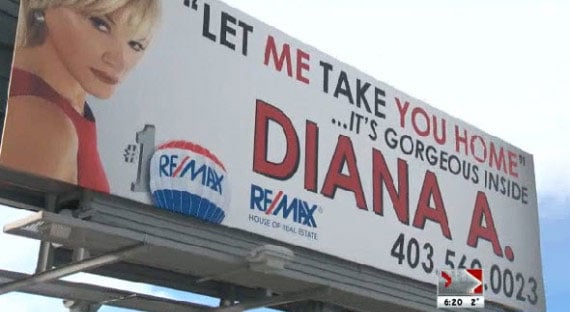 The ad, which is displayed on one of the city's busiest commuter routes, has become quite the talking point in the city this week, reports the Montreal Gazette, with many claiming that this kind of sales tactic is inappropriate for the real estate business, and some even labeling it "disturbing".

Mary Valentich, a social worker at the University of Calgary, said that the advert caught her by surprise when she first spotted it.

“It's a misguided effort to communicate selling houses—she’s selling herself and I don't think women need to do that," insisted Valentich.

She was backed up by Doug Firby of the Calgary Real Estate Board, who said that female realtors should be aware of the risks of advertising themselves in this way, adding that this was against the organization's advice on best practices for realtors.

Firby was alluding to what is the most worrying issue here, that of female real estate agent's safety while out and about, showing clients around homes. The risks that real estate agents face are well known, and there have been several high profile cases in which female agents have been killed, assaulted or robbed by their clients after being lured to show them around a home.

Jeff Buziak, an advocate for agent's safety whose own daughter, real estate agent Lindsay Buziak, was murdered by a client while showing them around a home in Calgary, told Global Calgary TV:

"It scares me that anyone would want to put an invitation out there. As subtle as it might be or humorous as some might think it is, I do believe it's an invitation, opening the door for something else that is not real estate.

Despite these criticisms, Arvastescu, whose Facebook profile suggests that she's hardly the most 'innocent' of real estate chicks, said that she stands by her provocative ad. Arvatescu's supporters backed her up, saying that it's a smart way of making herself stand out from the competition. However, RE/MAX officials have already said that they do not endorse the ad, telling Global Calgary that they had reservations even before the ad went up.

But irrespective of whether Arvastescu is right or wrong to flaunt herself in this way, there's no denying that she's certainly got the attention she was hoping for. We can only imagine her phone is ringing off the hook right now with legions of besotted buyers. Let's just hope she's careful 🙂

So what do you think about using 'risqué' or otherwise provocative ads in real estate? Is it a fair way to stand out from the crowd, or is this kind of sales tactic simply inappropriate in this industry? Let us know in the comments section below.