Real Estate Marketing & Beyond
Home » Housing » US Real Estate » Home Buying » Seattle is home to 10 of the nation's 30 most competitive neighborhoods for home buyers
Double-click to edit button text.
X

Seattle was recently revealed to be the nation’s hottest housing market for two months running, and now Redfin has said the city is home to ten of the country’s most competitive neighborhoods for homebuyers in 2017.

Redfin, which is based in Seattle, worked out which are the most competitive neighborhoods across the 27 largest metro areas in the U.S., finding that four of the top ten can also be found in Seattle.

The country’s toughest neighborhood for homebuyers is Bellevue, Wash.’s Factoria, which is home to the mobile network operator T-Mobile. Seattle’s University district ranks second, while two Boston, Mass., neighborhoods – Washington Square, Brookline, and Prospect Hill, Somerville – came in at 3rd and 4th place, respectively. There are also two San Francisco neighborhoods in the top ten, hardly a surprise given that the nation’s tech hub has also repeatedly been named as one of the most expensive places in the U.S. to buy or rent a home.

In Factoria, 62 percent of homes sold for over asking price and the typical home found a buyer in just seven days.

The most recent S&P CoreLogic Case-Shiller National Index reveals that Seattle’s home prices are soaring, fueled by a booming jobs market and population growth. Indeed, home values rose by 10.7 percent year over year in October, ahead of a previous 11 percent gain in September. 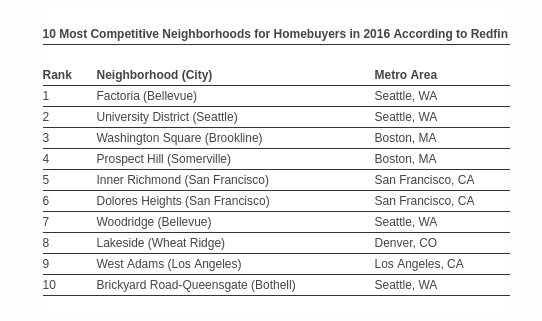 See the full report, including the top 30 neighborhoods and their median home sale price, here.