By Mike Wheatley | May 22, 2017
TwitterFacebookLinkedIn3Buffer1PinterestCopyReddit
4
SHARES

As rent becomes more expensive, renters are starting to look for cheaper housing options outside downtown cores, prompting rent payments to rise faster in the suburbs than in urban areas, according to a new Zillow report. For the first time in four years, suburban rents are rising faster than urban rents. 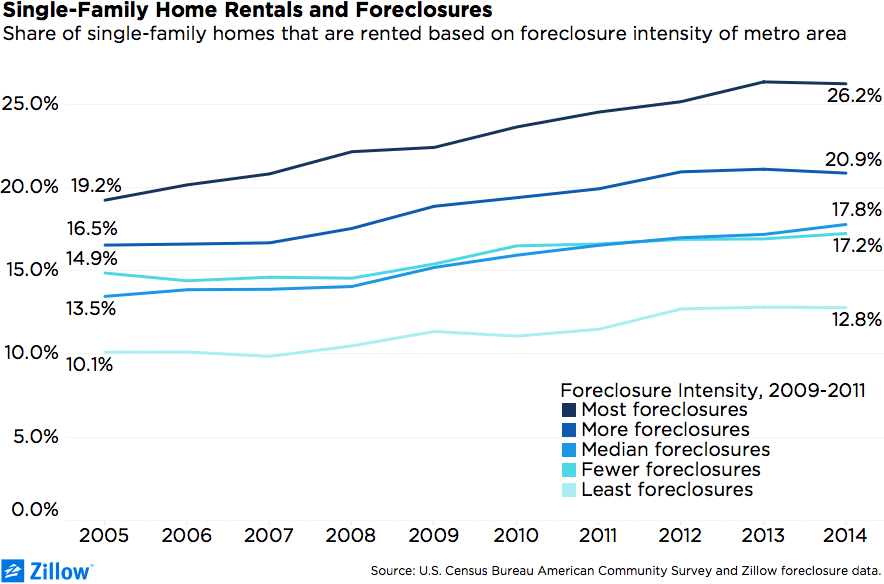 An increase in multifamily construction has slowed rent growth across the country, with rents rising at their slowest pace in five years. The suburbs often offer larger apartments and more single-family homes for rent with more space -- about 19 percent of all single-family homes in the U.S. are rentals, up from 13 percent in 2005.

The trend is more pronounced in booming housing markets where rent affordability is worsening. Rents in the Nashville, San Francisco and Seattle metro areas are growing faster in the suburbs than in urban areas as rising costs force renters out of the city, increasing demand in the suburbs. Over the past decade, the share of income needed for the median rent payment in the San Francisco metro has increased from 34 percent to 44 percent. In the Seattle metro, the share has increased from 26 percent to 32 percent.

Expensive coastal cities are coming off about a decade of rapidly rising rents. Years of increases have pushed urban living out of reach for many renters, who may be choosing a longer commute in exchange for cheaper rental payments. Rent affordability is a significant issue for renters across the country, and in many major metros, the share of income needed to pay rent well surpasses 30 percent.

"Because walkable urban centers close to amenities are typically a big draw for renters, you'd expect rents to rise faster in the city than in the suburbs -- which is exactly what we've been seeing until very recently," said Zillow Chief Economist Dr. Svenja Gudell. "But a handful of factors are helping turn the tables and beginning to push suburban rents up at a higher clip. These include deteriorating rental affordability in expensive urban cores; new apartments, albeit high-end ones, opening downtown compared to relatively few in outlying areas; and preferences among some renters toward the space offered by single-family homes in the suburbs. Rents themselves are still lower in the suburbs, but if demand keeps growing for suburban rentals and supply continues to lag, that will also start to change. As more formerly urban renters move to the suburbs in coming years, we'll likely start seeing more apartment buildings and walkable amenities popping up in those communities."