Why Real Estate in the Twin Cities Is So Attractive

For as long as anyone can remember, Minneapolis – St Paul have been called the Twin Cities, but really, there doesn’t seem to be a logical reason other than their proximity to each other. One is largely modern in architecture and the other leaning towards early 1900s Victorian. They are adjoining cities built up primarily around the Mississippi, Minnesota and St. Croix Rivers, having seven metro counties over the large geographical area and in all 16 counties with 2 in Wisconsin, making this one of the strangest areas in the country in terms of a major metropolitan region!

With Minneapolis being the largest city in the state of Minnesota and St. Paul being the state capital, it is possible to go on for days describing this rich and diverse Midwestern metro region that has some of the most attractive real estate in the country. However, it is not because of the actual land or structures built on that land. Rather, the real estate in the Twin Cities is attractive for socioeconomic reasons that are ultimately what attracts newcomers to almost any area in the world. 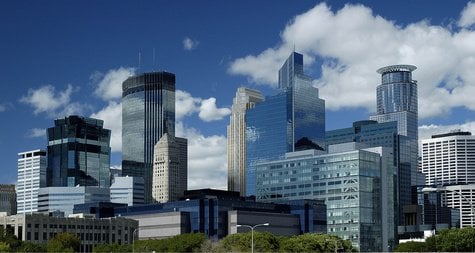 First and Foremost – Availability of Jobs
According to Roost Real Estate, many new homebuyers scoped out the region first because of its extremely low rate of unemployment. With the national rate being 4.9% in January of 2016 but only 3.3% in Minneapolis, that says a lot! Also, the Twin Cities are said to be the industrial/financial hub of the Midwest between New York and Seattle, which means that work in technology and the financial arena is always going to be available. Whether your job takes you to the 2 counties in Wisconsin or the 16 Minnesota Counties, it is all within one major metro area that is accessible via public transportation or a connection of highways that snake through the region.

Cost of Buying a Home in the Twin Cities
Then there is the cost of real estate in the Twin Cities which is the deal clincher in most cases. The average cost of a home is at the bottom end of the chart in comparison to other major metro areas of the country. This interactive map shows you that real estate is much higher priced in most cities around the country and with more than 40% of the population having attained a college degree, the cost of living and quality of life are among the most attractive as well.

Having a great number of some of the country’s largest corporations being headquarted in the Twin Cities area, the potential to stay continually employed is better than average and new businesses are making their debut here as well. Property taxes are not inordinately high but the standard of education is! With Minnesota being ranked #10 in the nation’s most educated states, a lot can be said for the education your children will receive upon migrating to the Twin Cities region. All in all, the allure is based on a high standard of living with good future prospects. If you had to sum it up, that’s why real estate in the Twin Cities is so attractive.